The mission of The La Marque High School is to foster an educational environment in which all students are challenged, excellence is expected, and individual differences are valued; so students maximize their full potential as responsible, productive, contributing members of society. 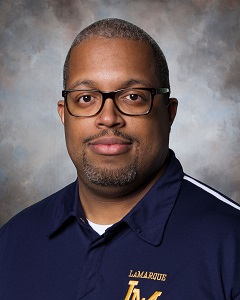 A veteran educator (12 years) from Dallas, TX; Ricky began his career in 2006 as a business Educator teacher at North Shore Senior High School in Galena Park ISD. He spent five years in the classroom. At the request of his principal, his last year in the classroom was spent as a World History teacher. In this capacity, he learned to use data to influence instructional planning and student achievement. As a first year Wold History teacher, he helped 97% of his students pass the TAKS test and 42% of those students achieve a commended score. Ricky spent his last five years at North Shore Senior High School as an administrator (At-Risk Specialist, Assistant Principal, and Lead Assistant Principal).

Ricky is married to Ta Lula Nicholson of Houston, TX. He has four children; Jaylen (17), Courtland (8), Laurence and Lauren (6). The family also has an Olde English Bulldog, Langston. Ricky is currently pursuing his doctorate at the University Houston (Professional Leadership). He obtained his Master's in Education Administration from Concordia University Texas and his Bachelors of Business Administration from Langston University.